As I walked up Jones St. towards Blue Dottie's it was apparent I wasn't the only one to read the review of getting there early. The lineup out the door meant more time for those to contemplate pancakes or French toast in their most important meal that would kick start the day. For some in the line that day would include Alcatraz and cable cars and for others the Golden Gate Bridge and for me - Oracle OpenWorld. 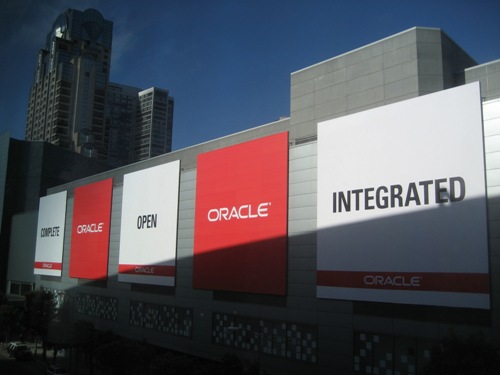 That's the official name at least although easily the conference could also be called Oracle $Open$World$, OpenBar, TakesOverTheWorld, or FreeWorld. It is well done, well hosted, large, accommodating, has something for everyone and is always well attended.

Networking, professional development and exhibition halls aside, Oracle and the city of San Francisco pampered attendees with food and entertainment from dawn 'til dusk. Considered one of the largest events of its kind - and growing - the ratio of setup hours to attendees was nearly 1:1. This year's attendance was more than 43,000. Say, my 15-minute trip last night to get Halloween treats for ~125 eager-treaters is looking to be pretty decent!

On Saturday night I organized a to-do list and familiarized myself with the conference maps. The Orientation booklet provided by Oracle was a gem and from what I had gathered not a minute was to be spared. I saw myself going to the Sessions, Keynotes, Exhibition Halls, DEMOgrounds and Networking Activities but only had a vague picture of how in-depth, how welcoming, how busy the next 5 days would be.

Where are you from? What do you do?

Early Sunday morning I could have been found at Blue Dottie's Café over eggs and toast reviewing the Orientation booklet yet again. The conference won't officially kick-off until Monday but today the lessons begin for those of us with the Oracle Developer pass. The Developer sessions are a magnitude of learning upcoming features, best/worst practices, new tools, how-tos and hands-on learning labs.

Statement of Direction for Tools

A couple of the keywords which kept coming up time and time again were "Integration" and "Migration". Although Forms is supported until at least 2013 I could see from the sessions being offered that there are other technologies simply better or more suited for other tasks. Business is continually changing and while Forms can be depended on for your standard office data entry it requires integration with much more to offer flexibility with, for example, mobile devices and online web applications.

Migration comes in various options with Forms to ApEx, Forms to Java EE Web and Reports to any format. Another front end interface I found to garner attention is Microsoft Office. Users are already familiar with the Office toolset and therefore we are starting to see technologies such as BI tools or ADFdi to create forms in, for example, Excel that are easy to use and secure.

Security, specifically monitoring and managing, is gaining more and more attention year after year. A speaker in a "Top Trends in GRC" session noted that, first, people wanted compliance in 2004, now in 2008 they want risk management and then it'll be performance in 2016. As more groups look towards audit, risk and compliance it won't be surprising to see greater Oracle GRC product sessions available in the future. 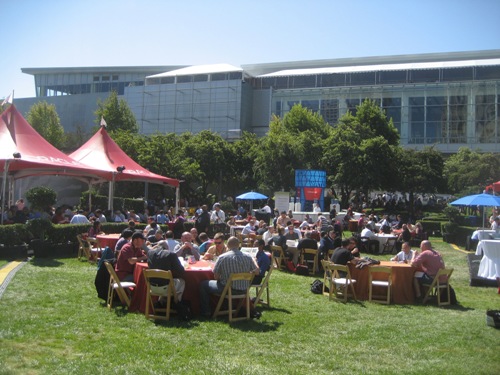 Where are you from? What do you do? conversations. Another conversation starter is seeing another one of the same 43,000 Oracle bags roaming around San Francisco... 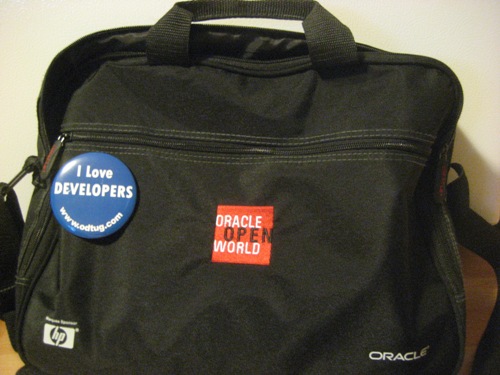 A special treat we were given tonight was a witty and entertaining speech-debate given by James Carville and Mary Matalin. Husband and wife - one a Democrat, the other a Republican - together they have advised every U.S. president for the past 25 years. Fittingly, with the upcoming American election, they shared their passion about political life and the presidential candidates. 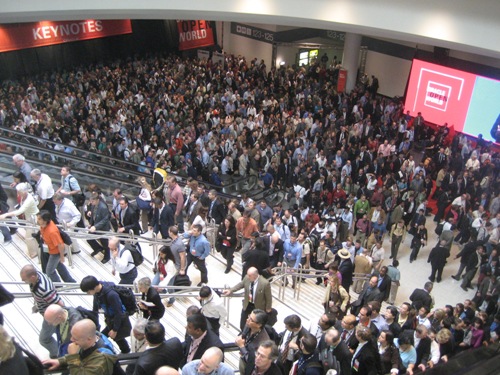 The Monday morning keynote was delivered by Charles Phillips, President, Oracle Corporation. He stressed that 2008 was the Year of Innovation for Oracle - 3 billion invested in R&D and numerous acquisitions resulting in expansion - and then elaborated on this year's theme

Oracle is sooner than later becoming the only company to have a complete end-to-end suite based on open standards in order to integrate any application over standard middleware.

For the Developers on Tuesday a less formal keynote was given by Oracle guru Tom Kyte where he emphasized the importance of "SELECT" and indirectly the value of ApEx, SQLDeveloper and SQL*Plus. The lecture was titled "What is the Best Way?" and was appropriately answered with:

Larry Ellison, CEO, Oracle Corporation, rounded out a weeks worth of Keynotes on Wednesday by unveiling Oracle's first hardware product - The X: Oracle Database Machine. The fundamental advantage of The X is that it returns query results as opposed to disk blocks in order to mitigate the "data bandwidth problem". 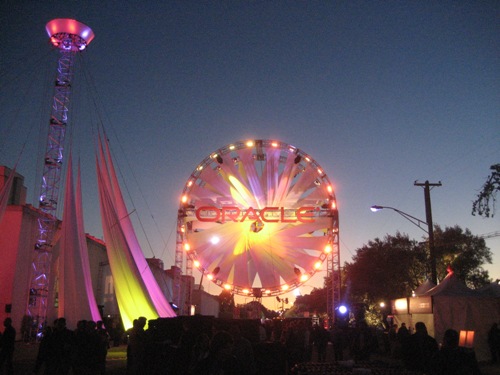 They are celebrities and superstars - I'm sure - however, I must say that the concert lineup for Oracle's Appreciation Event was a bit different from the Akon and Nickelback I'm used to listening to. The wrap-up party took us to Treasure Island just off the Bay Bridge in Oakland where the atmosphere can be compared to Saskatoon's Ex or Vancouver's PNE - only that everything is free and you share it with 43,000 of your closest geek buddies. Nearly everyone went home that night with cute stuffed animals and I really enjoyed being a part of the adults-turning-back-the-clock movement.

San Francisco residents are very talented and this talent was evident all throughout Oracle OpenWorld - the cellist at Keynotes, magicians in the Exhibition Halls, caricature artists at the parties, etc. All of whom are local residents. There's such an active and vibrant feeling in the air that it can make the city quite addictive. Perhaps that is why it's once again home to OpenWorld 2009. 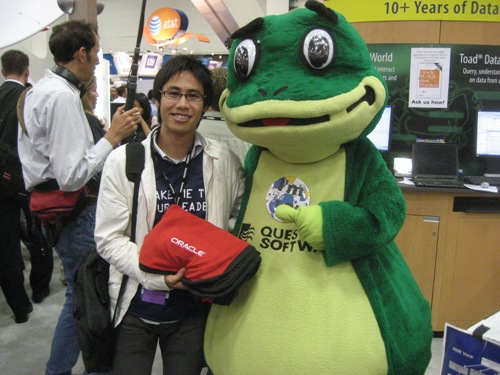