An Inexpensive Virtual Visit to the Oracle OpenWorld in SFO


In December of 2004, ESTI Analysts, Mohammed Huq and Jim Russell, ventured south for a week to San Francisco to attend the annual Oracle OpenWorld conference. This conference, held every year in California, brings together developers, managers and decision makers from around the world to see the direction the Oracle products are taking, pick up development tips, and find out what the key players in the industry have to say. This year, the "key players" included Larry Ellison from Oracle, Michael Dell from Dell Computers, Scott McNealy from Sun Microsystems and Carly Fiorina, former CEO of HP. 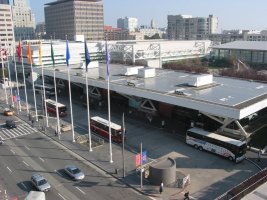 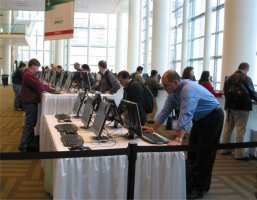 The majority of the sessions took place in Moscone Center West.  It also provided a vast array of computers for checking your timetable and email.

Below are some excerpts from the 26 page report Mohammed and Jim prepared to describe their findings. Please contact esti@esti.ca if you are interested in receiving the full report and we will be happy to e-mail it to you.

"This year Oracle has combined two premier conferences, its business applications conference - Oracle AppsWorld - and its technology conference - OracleWorld - into one information packed event: Oracle OpenWorld. By consolidating the conferences it gave Oracle a single venue for presenting a complete picture of all their products and technologies. This helped us better understand not just how each set of products works individually but also how they combine to form an open, standards-based, integration ready platform on which one can run a real time business. This year the focus at OpenWorld was on Grid Computing."

The exhibition hall was in Moscone Center North.

"The new release, Oracle9i Forms is a web-only release of Forms. This session helped developers migrate their Oracle Forms client/server applications to Forms on the web but the concepts apply equally when migrating from any client/server versions of Forms to any version of Forms on the web. It explained the Oracle9iAS Forms Services architecture, and how Forms applications run on the web. It summarized the upgrade process, migrating Forms 6i applications to Oracle9i Forms. The session also described."

"In Oracle Database 10g, upgrade processing has gotten much smarter--upgrades are easier to do, with fewer steps and significantly less complexity. This session discussed the best practices for upgrading from Oracle8i to Oracle Database 10g. These practices are illustrated through the real-life experiences of Motorola's Biometrics Business Unit." 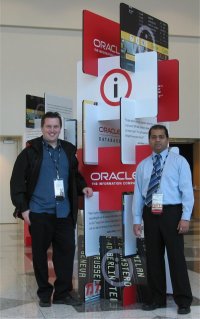