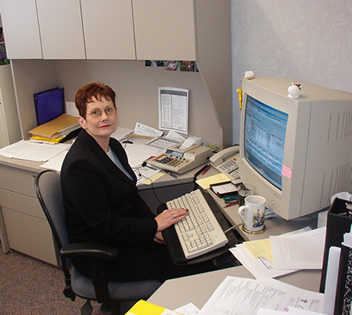 Shirley reviews the results of the 'extreme makeover'

With all of the new 'reality' shows hitting the airwaves these days, we wanted to share the details of a recent 'extreme makeover' that occurred at the Saskatchewan Teachers' Superannuation Commission (STSC) in Regina.

As is common for an 'extreme makeover', the 'subject' was carefully analyzed and a plan carefully formulated in order to have a successful 'operation'. A new faster application server was needed, the database was old and needed to be replaced, the version of the Oracle forms and reports needed a 'facelift'. It seemed like an impossible 'makeover' but all of the specialists were confident that the many operations were possible and that everyone would be very impressed with the results.

The first major step was to convert all of the existing Oracle Forms and Oracle Reports from the old version (Oracle Developer 2.1) to the more current Oracle 6i. Once converted, these files were moved to 'recovery' into the test environment where they could be carefully 'observed' and a thorough testing of all the functionality could be performed. So far, so good, the 'patient' was improving nicely.

While the testing was being conducted, a new, faster application server was purchased and configured. The selected server was a HP Proliant DL380 G3 server with RAID (Redundant Array of Inexpensive Disks) technology.

Finally, the production database was upgraded to Oracle 9i, and all of the converted, tested forms and reports were promoted to the new production application server. Once everything was in place, final testing was performed to ensure that the promotion to the production environment was a success. The 'patient' was ready for the big finale.

Everyone gathered to witness the unveiling and to see first hand how the 'extreme makeover' had turned out. Everyone was delighted. All the planning and hard work had paid off.

Thanks to everyone who worked hard to complete this 'extreme makeover'