HEPP/HEBP has undertaken an initiative to improve and enhance the services they offer to their members. This initiative, the Member Administration Records System (MARS) project, has been a multiphase process encompassing all facets of the organization. One of the facets within the MARS project is the development of a disAbility & Rehabilitation System for the d&R department within HEBP.

The d&R department is responsible for the processing, adjudication, and rehabilitation of all disability claims for HEBP members who participate in the d&R plan. The d&R plan began in October 1988 under the administration of North America Life. In June 2002, HEBP undertook the administration and adjudication of the plan with an average of 500 active claims and roughly 80 claims being processed per month.

As components to the MARS project, ESTI has already implemented Green File (record imaging), TRACS (Task, Reminders, And Contacts System), the Contact System, and the Employer system for all HEPP/HEBP departments.

Previously the d&R staff had a stand-alone system that duplicated much of the data and work required to process a claim. With the release of the d&R System the staff now have an easy to use application that allows them to quickly begin the filing process when an application is received. Integration to the existing systems already released as part of the MARS project, help to eliminate the previous duplication of data and the potential of inaccurate data due to disjointed systems.

With the move to a new system came the challenge of ensuring the data from the old system was successfully converted. A team of programmers and testers ensured that everything was moved across without error and they were able to correct any data inconsistencies that were previously undetected due to disjointed systems.

The next phase of the d&R project will include features such as the authorization of submitted claim expenses and integration with the Finance System to electronically transfer benefit payments and authorized expense reimbursements.

We would like to take this opportunity to congratulate HEPP/HEBP on this successful implementation of another integral component in the MARS project.

The HEBP Disability and Rehabilitation Staff are excited in using the new disAbility & Rehabilitation System which went live December 6th. The new system allows for efficiencies between the d&R System, Green File and TRACS. These efficiencies will lead to improved service to members and stakeholders. The department will be hosting an open house on January 5th to showcase the system and share experiences of the development and implementation of the new system. Congratulations to all involved and ESTI....Barb Kieloch, Director, Disability and Rehabilitation, HEBP 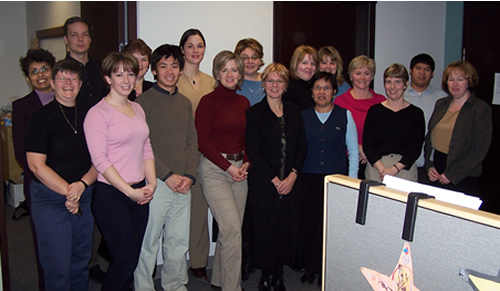